In a farm in Lyon County, a study was being conducted to evaluate the management of slugs in soybeans. By mid-May a couple of slugs were found, and a laboratory colony was started.

However, the slugs in the field vanished due to drastic environmental conditions (absence of rains and temperatures above 85⁰ F). Later on, the farmer complained about soybean plant damage in some areas of his farm. Plants with at least two to three true leaves were completely destroyed, leaving blank spots in the field (Figure 1).

At first, it was hard to believe that mollusks could be the cause of this damage, especially when the area has been experiencing a drought period and warmer temperatures; however, they were. In this case, the perpetrators causing this damage were snails.

It seems that the abundant organic matter provided a refuge for the snails. I visited other locations with this type of abundant organic matter, but snails were not present. At the Lyon County farm, the presence of a slope, a creek at the bottom of the field, and accumulation of moisture in the lower part of the field may have provided proper conditions for the outbreak of snails. Areas where there were between 10 and 80 snails per 2 square feet (Figure 2) were found.

Snails differ from slugs by the presence of the spiral shell that is carried on its back. The shell is a hard structure composed of calcium carbonate, which protects their soft body and internal organs. Slugs and snails do not have legs. However, snails have a “foot” that allows them to move and slide along easily with the help of the mucus it secretes.

Snails can live up 2 to 3 years. As this is a work in progress, UK entomologists have not identified the snail species yet and are conducting studies to understand this type of presence in soybean fields planted after corn.

There is no curative control for slugs or snail damage. Populations may be reduced with vertical disking to decrease the amount of organic matter left by corn. Replanting soybean is one of the solutions conducted by some farmers.

There are molluscicides used to control slugs as a preventative tool. These are metaldehyde or iron phosphate-based products. Due to the high numbers, UK Entomology is testing different types of molluscicide formulations and baits to manage this pest, as well running some bioassays to conduct further evaluations. 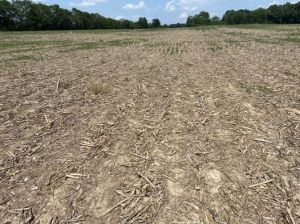 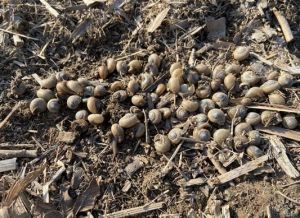 Figure 2. Between 10 and 80 snails per 2 square feet were found under stalks, husk, and cobs of corn planted the previous season. (Photo: Raul T. Villanueva, UK).