Minnesota has over 600,000 acres of irrigated cropland, and many of these irrigated acres are in the state’s Central Sands region.

The coarse-textured or sandy nature of the region’s soils means that they do not hold large quantities of water and have a rapid drainage rate to groundwater compared to high clay soils.

These soils present challenges in agricultural irrigation and nutrient management. It takes less precipitation to saturate these soils and they hold less plant-available water than loams. 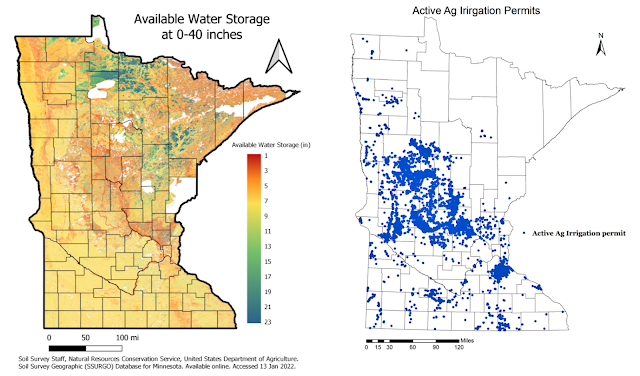 At the same time, many communities in this region depend on groundwater as their drinking water source. Balancing agriculture’s economic needs while protecting rural drinking water supplies leads to two critical challenges in agricultural watershed management: 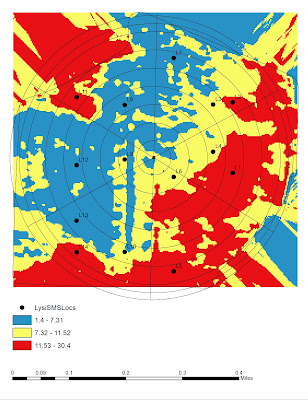 A meaningful way to address these issues is by implementing proven advanced irrigation management techniques and technologies such as variable rate irrigation (VRI).

With funding from the AGRI Sustainable Agriculture Demonstration Grant from the Minnesota Department of Agriculture (MDA), we are currently evaluating the ability of precision irrigation technology to address both groundwater quality and water quantity issues. The study is being conducted on a grower’s field in Stearns County.

The project is focused on evaluating the impact of VRI technology on water savings, corn yield, and nitrogen (N) leaching in comparison to uniform water management. VRI technology addresses the reality that soil physical properties can vary significantly within a single field — from rapidly draining sandy soils to poorly drained clays.

Uniform rate irrigation (URI) does not account for this variability, leading to potential over- or under-application of irrigation water and subsequent negative impacts on crop yields.

By addressing in-field variability with VRI, we can optimize irrigation, maximize crop growth, and minimize negative environmental consequences. For this project, management zones for VRI management were created based on soil electrical conductivity (EC), soil type, elevation, and previous yield. An irrigation rate of 100% was applied across the entire URI plots regardless of the soil variability.

After a single year of the project, we found some interesting results. Overall, because of very dry conditions during the 2021 growing season, greater irrigation in URI plots did not cause any significant grain yield loss as the water use by the crop was high.

However, if precipitation had been in the normal range, we would have expected higher yields in VRI plots and lower yield in URI. On average, the VRI treatment used 43% less water compared to URI while producing similar yield. The URI treatment produced an average of 258 bu/ac and VRI produced 242 bu/ac while using 11.6 inches and 6.6 inches water respectively.

These results indicate that VRI could be beneficial in terms of saving water and reducing nutrient loss.

The volume of water percolating through the soil in the URI system is much higher and might have a reduced concentration of nitrate, but the net nitrate loss would be higher under URI.

We look forward to continuing this work in 2022. Special thanks to the AGRI Sustainable Agriculture Demonstration Grant and MDA for funding this research and to our farmer cooperator for collaborating on this project.