The economics of corn production challenge many farmers to minimize production costs. Hybrid selection is one way to reduce costs. Planting corn hybrids without Bacillus thuringiensis (Bt) proteins for protection against European corn borer (ECB), corn rootworm, or both will reduce seed costs.

However, if not careful, farmers could inadvertently reduce crop revenues if they select hybrids without considering yield potential or insect populations in their fields.

Yield potential is the first thing to consider when selecting a corn hybrid. Bt traits protect the yield potential of a hybrid, but yield benefits only occur when targeted insect population densities are above economic injury levels. When insect pressure is low or absent, economic benefit with trait-protected hybrids only occurs if higher costs are offset by greater yields.

Switching to less-expensive non-Bt seed can be a good strategy when yields are comparable or when seed cost savings exceed any reduced yield potential plus prospective insect losses. In many 2022 fields, planting corn without a Bt trait can work well, if you recognize and account for potential risk from ECB and other insect pests.

Between its introduction to the state in the 1940s and the advent of corn hybrids with Bt traits, ECB was responsible for significant yield losses throughout MN. After initially feeding on leaf tissue or pollen, 3rd stage larvae injure corn as they tunnel into the stalks, ears tips, and ear shanks.

This injury reduces yield by interrupting the flow of water and nutrients. Harvestability is reduced when affected stalks lodge or break, or when tunnels in the shank cause ear drop. 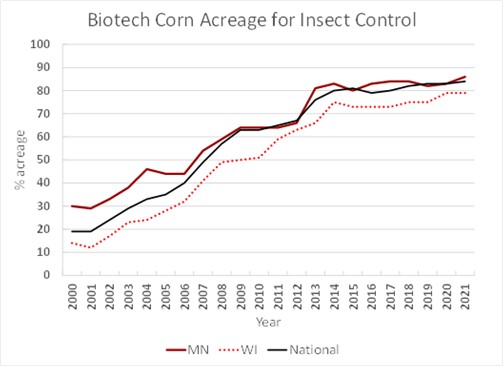 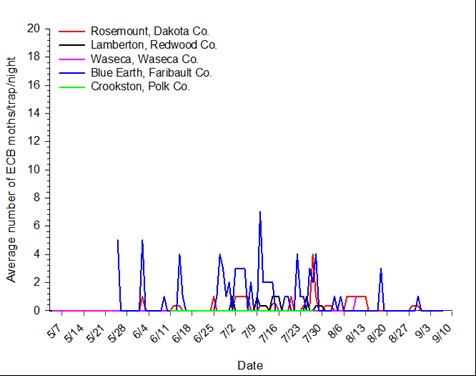 Figure 2. MN black-light trap ECB captures for 2021. The June captures correspond to 1st generation and the mid- August to September flight corresponds to the 2nd generation. The 2nd generation ECB flight can overlap the univoltine moth flights that occur in July to August. The July data indicate that the univoltine population continues to be active in southern MN. Moths continued to be trapped at historically low numbers, for all locations. Source: MN Extension IPM Program: MN ECB blacklight trap captures.  Click Image to Enlarge

During 2017-21, the MN Corn Research and Promotion Council has provided funding to increase the number of corn fields surveyed for overwintering larvae (Figure 3,5) and ECB injury (Figure 4,5).

During 2021, 176 randomly selected commercial fields were evaluated for the presence of overwintering ECB larvae. Fall overwintering larval population densities in WC and NW Minnesota were somewhat lower in 2021 than in previous years. 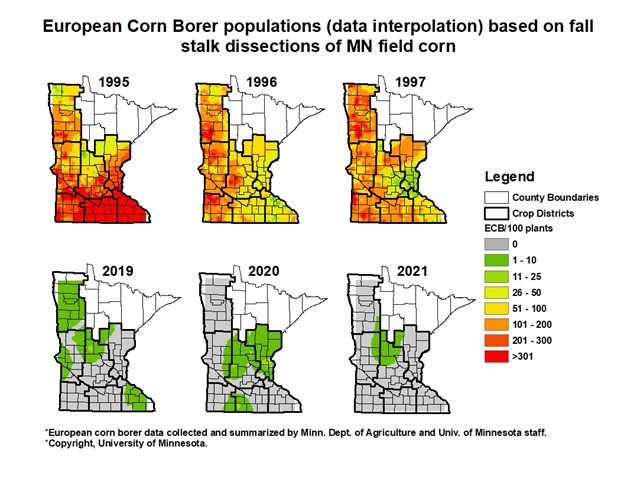 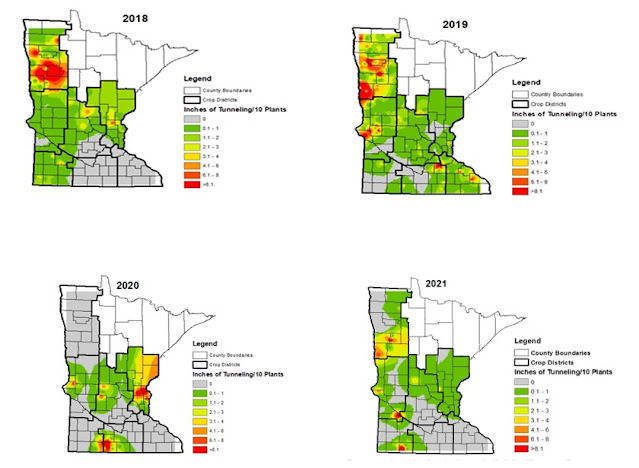 The average density in known non-Bt fields remains much lower than the traditional economic threshold levels for ECB (typically greater than 0.5 larvae/plant). Forty fields, known to lack a Bt trait, were sampled and averaged 0.0475 larvae/plant. Be aware that the larvae/plant observations of overwintering ECB can underestimate yield loss from multivoltine populations when late instar larvae are killed by predation or parasitism.

It is important to remember that these numbers are state averages, and the maps represent interpolated spatial data and do not reflect the densities within individual fields. In other words, they do not replace scouting for field-specific decisions.

From an areawide and long-term resistance management view, it is prudent to maintain Bt-susceptible ECB in the state. Non-Bt, or “refuge,” corn is necessary to produce moths that have had less exposure to Bt traits as larvae, and thus should continue to be susceptible to Bt.

The subsequent ideal outcome is that susceptible genes dominate over time, helping conserve the Bt crop technology for long as possible. For ECB, this continues to be one of the ongoing success stories with Bt traits. The 2021 fall survey did not reveal any fields with suspected Bt-resistance, and the prolonged low ECB populations levels suggest Bt traits continue to work well.

The risk of ECB developing resistance to Bt is not zero, however, continued monitoring of ECB populations in Bt has value. For example, Bt resistance has appeared in ECB in Nova Scotia, Canada, arising from intensive use of one Bt trait. (Note: this ECB biotype does not occur in Minnesota).

One situation bears scrutiny with ear-feeding caterpillars, such as ECB. In the case of “refuge-in-a-bag” fields, pollen shed between the Bt ears and nearby non-Bt ears via refuge plants can lead to a mosaic of Bt expression in pollen and kernels of non-Bt ears – potentially reducing refuge efficacy and increasing selection pressure for resistance.

This mosaic in kernel Bt expression is a concern for ECB, and other caterpillar pests, such as fall armyworm (FAW) and corn earworm (CEW); there are several cases of Bt resistance with FAW and CEW globally on multiple crops, including corn.

Managing ECB in the absence of Bt

That said, a temporary increase in acres planted to non-Bt corn should not dramatically increase the risk of economic damage from ECB in the near-term, particularly if the non-Bt fields are surrounded by several Bt fields.

However, this risk likely increases as the proportion of local fields planted to non-Bt increases, particularly where the local shift away from Bt dominates the locale for several years and where non-Bt corn is planted in large contiguous blocks. Most likely, the higher fall ECB populations observed in some fields reflect local non-Bt dominance in some areas of Minnesota (Figure 4).

Because ECB colonizes over 100 host plants, such as sweet corn, peppers, green beans, and wild and cultivated hemp, there are ample hosts available in the Midwest region for ECB to maintain low-level populations; the species will not go extinct any time soon.

Another variable to consider is that two biotypes of ECB continue to be present in Minnesota. A univoltine biotype that produces a single generation each year was the first type introduced into the U.S and historically predominated in the northern and central corn-growing areas of the state.

After the adoption of Bt, higher ECB densities have typically occurred in areas where univoltine populations predominate and Bt adoption rates are somewhat lower. The multivoltine biotype, which historically predominated in southern MN, typically produces two, or rarely three, larval generations depending on temperature accumulation and photoperiod cues.

Risk of yield loss from ECB can be reduced if you scout fields and apply a labeled insecticide where needed. Early and late-planted fields will be most attractive to egg-laying 1st and 2nd generation moths of the multivoltine biotype, respectively. These fields should be scouted for ECB if planted to a hybrid without an above-ground Bt trait.

In contrast, it takes univoltine larvae longer to complete development, so moths of this biotype produce an adult flight in-between the multivoltine 1st and 2nd generation moths. Where the univoltine biotype strain occurs, scouting should target fields from pre-tassel to near pollination when the flight is underway, typically mid-July to early August.

Scouting should focus on small larvae in leaf axils and ears; a more challenging situation since larvae are no longer congregated in the whorl. In areas with biotype mixtures, mixed infestations can occur with overlapping and prolonged scouting windows throughout the summer. Degree-day models can help time scouting efforts but are not a substitute for being in the field.

Bt corn should also receive some scouting attention late season to detect potential ECB resistance and attack by other ear-feeding caterpillars. While ECB resistance to Bt has not been detected in Midwest, several above-ground traits are now less effective against other pest species, such as corn earworm, western bean cutworm, and fall armyworm.

If you do detect an unusually high proportion of injured plants, confirm you planted a hybrid or hybrids with above-ground Bt traits and notify your seed dealer. Independent confirmation is important so ask a trusted ag advisor to investigate or confirm your suspicions and test plants for Bt expression. Of course, we would appreciate a “heads-up.”

When moving away from Bt traits to reduce costs, keep in mind three important considerations: