I have been watching some wheat fields consistently after that ice storm came in late October. I am currently seeing anything from good looking wheat fields to areas with incomplete, thin, and uneven stands. We might not see complete stands for a while as the wheat emergence seems to be very uneven, and the wheat is still slowly coming up (Figure 1).

The thin and uneven stand establishment of the current wheat crop is likely due to the severe drought from the end of September to most of October. Then, most of Oklahoma was hit by the ice storm during the last week of October, with some areas receiving up to 5 inches of rain.

Although that rain came in a much-needed time, it could have created a crust in the soil preventing the coleoptile from breaking through the soil surface.

If the wheat fails to emerge as expected in your field, dig up the soil and look for an “accordion” like plant. If you see that wheat has emerged its first true leaf under the soil surface, and it has been sitting there for a week or more, it will probably not going make it (Figure 2).

However, I am seeing crinkled coleoptiles in fields around Stillwater that are coming up slowly and will be fine. The crinkles probably occurred when the heavy rain occurred during the ice storm, but it was not enough to prevent the coleoptile from continuing to grow and pushing through the soil surface for the most part (Figure 3).

Overall, our variety trials that were planted sometime in October are coming up nicely, but we might not have a complete stand for a little while in some locations. Robert Calhoun, the Senior Agriculturalist of OSU Small Grains Program.

About 95% of the wheat in our variety trial at Altus has emerged and shows adequate stands (planted on September 29). Gary Strickland, the Jackson County Extension Agriculture Educator and Southwest Research and Extension Center Regional Agronomist.

Josh Bushong, the OSU Area Extension Agronomy Specialist, reported in his Ag Insights November report that most of the fields in the North Central region are showing thin and uneven stands. He also mentioned this would likely have a small effect for grain only-producers.

As a summary, most of the fields that I am seeing or hearing about that were planted in October are still coming up. Wheat growth is a function of temperature. The cooler temperatures and lower cumulative growing degree days in the coming months will slow down growth until March or so. Plants may compensate to a certain extent for that reduced stand, and wheat producers aiming for grain-only production should not be concerned yet. 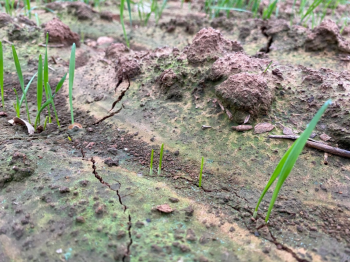 Figure 1. Uneven wheat emergence in a field planted on October 16. Picture was taken on November 9, 2020. 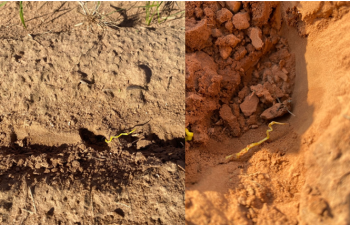 Figure 2. Wheat that has emerged its first true leaf under the soil surface will lose viability after one week or so. Field planted on October 21. Picture taken on November 9, 2020. 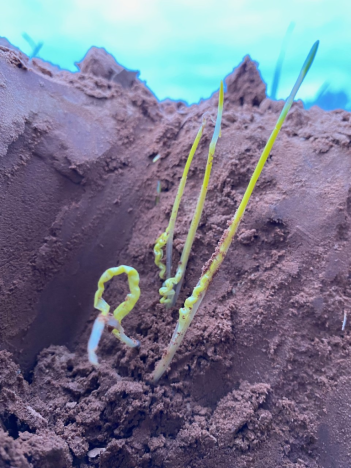 Figure 3. Part of the coleoptile got crinkled due to heavy rain and light soil crusting during the emergence period. Still, most of the plants seem to continue growing and breaking through the soil surface. Field planted on October 21. Picture was taken on November 9, 2020. 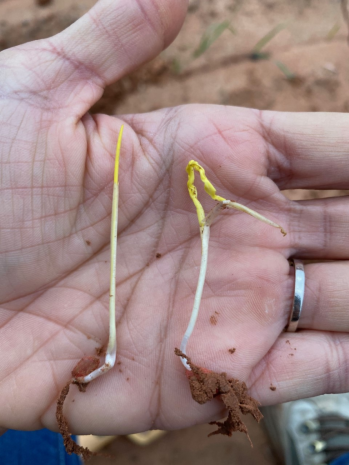 The plant on the right is likely not going to make it as the first leaf seemed to be stuck in the leaf sheath and would not to be able to emerge properly. 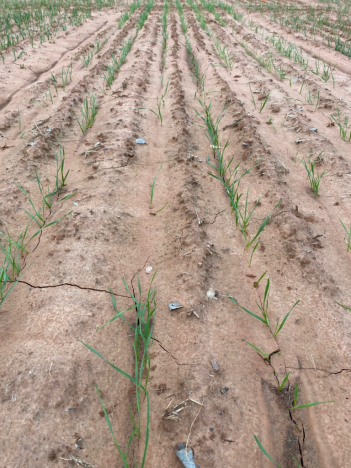 Incomplete wheat stand for a field near Stillwater planted on October 21. This field had enough moisture for wheat to begin germination as soon as it was planted, but emergence was hindered by the excessive rain from the ice storm that took place during the week of October 26, 2020. 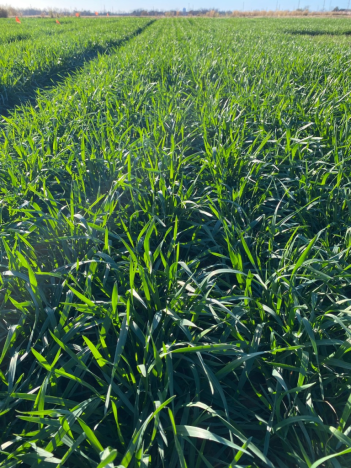 Wheat is looking good at the forage trial in Stillwater. Although, it would benefit for an additional drop of water. Planted on September 21, 2020. Picture taken on November 16, 2020. 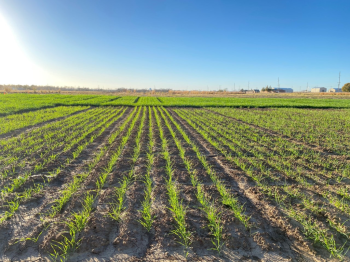 Wheat demonstration plots planted on September 21 (on the back) and on October 16 (in the front). Picture taken on November 16, 2020.