Most of the rice in southwest Louisiana which was drill-seeded in early March is at or near green ring this week. Earlier drill-seeded rice and water-seeded rice is at panicle differentiation (1/2-inch internode elongation) to early boot. Rice planting in northeast Louisiana was delayed in most areas this year due to wet conditions but planting wrapped up last week and most growers are reporting good stands.

Early planted rice in south Louisiana has faced very little diversity this year so far, save a few cold spells which slowed growth and caused some wind damage. We did see some more drastic stress symptoms in rice where herbicides and the permanent flood were applied just prior to the cold spells. Rice quickly recovered in most cases after a few days of warmer weather and good growing conditions. Other than that, this year’s crop looks great and we have a higher yield potential this year than we have seen in the past several years at this point in the season.

Weather this year has been odd to say the least. The average daily high temperature during March in Crowley was approximately 10 degrees higher than the historical average (Figure 1). April was also higher than normal during the first week and a half. However, in mid- and late April we saw two separate cold fronts. If you were to average the April temperatures, you would see that they fall somewhat close to the historical average. May temperatures thus far are cooler than normal. 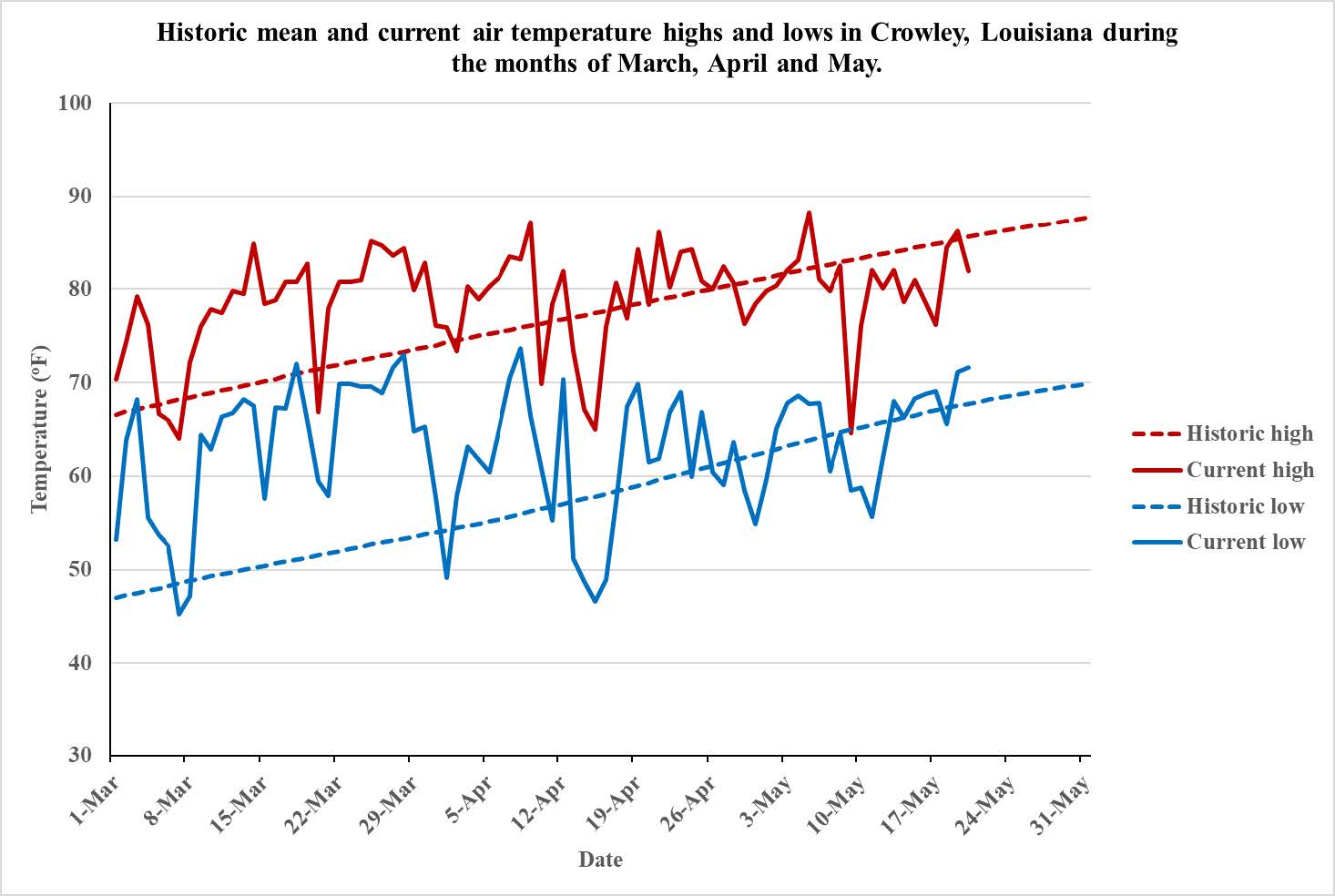 In general, it takes between 75 to 175 heat units for each leaf to emerge during the seedling stages of rice development. Of course, the actual number of DD50 units needed for each stage of rice development can vary depending the variety being grown. However, 150 DD50 units per rice leaf is a good estimate for most of our semi-dwarf varieties that we are currently growing. Using this criterion and our currently accumulated DD50 heat units for rice water seeded on March 1 (Fig. 2), we would expect rice to be past green ring and somewhere around panicle differentiation at this time. We can also see that we accumulated enough early heat units in March to put us approximately 2 weeks ahead of normal. 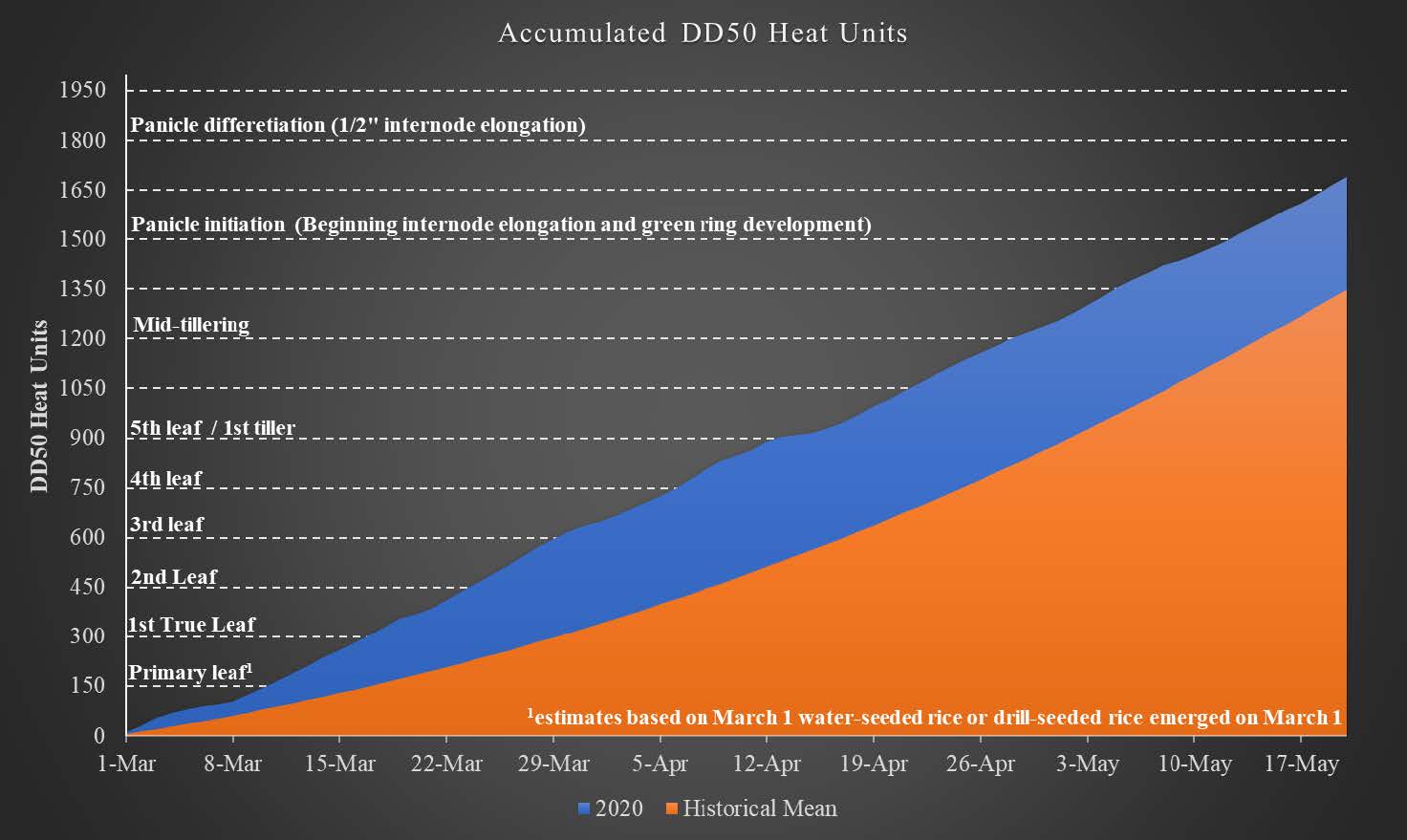 However, after our recent cool spells it looks like we are currently only 1 week earlier than normal. If cooler-than-normal conditions continue this month and into June, we will be on track for an average maturing year with harvest beginning in late July to early August. 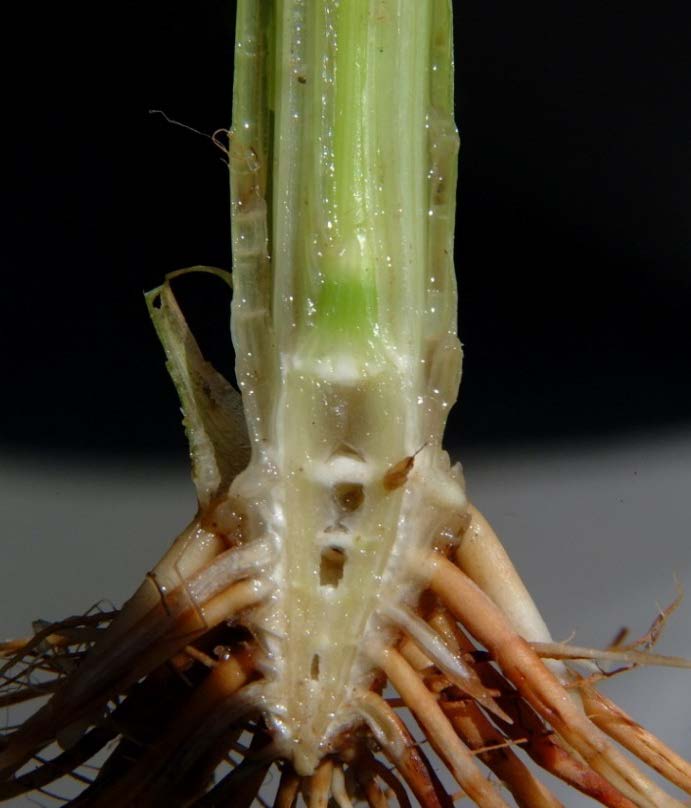