I also have seen ‘hot spots’ indicative of barley yellow dwarf (Figure 2) around Stillwater, but did not find any aphids associated with these spots. From Texas, Dr. Clark Neely(Small Grains and Oilseed Extension Specialist; Texas A&M AgriLife Extension) relayed to me on April 4 that, “Overall, I think we have avoided the stripe rust and what little was around is shutting down now. Leaf rust is around, but seems lighter than normal for the moment.”

Across Oklahoma, wheat leaf and stripe rust still are largely absent, although a few “stripes” of stripe rust were found by Zack Meyer here at Stillwater this morning at an Extension Educators in-service training. This lack of the rusts in Oklahoma is supported by the recently implemented scouting program involving Oklahoma Extension Educators. This program asks county educators to look for and report weekly the occurrence of stripe rust, leaf rust, and/or powdery mildew they observe in commercial fields, variety trials, or variety demonstrations located in their counties.

For the week ending on April 5, observations reported from across southern and mid-Oklahoma (Jackson, Dewey, Washita, Blaine, and Kingfisher Counties) indicated no leaf or stripe rust and only one report of powdery mildew on lower and mid-leaves in Washita County. It is still a bit early for reports to come in from across northern Oklahoma. Thanks are extended to all the educators that participated in this pilot program, and I would encourage more participation to facilitate this reporting program. 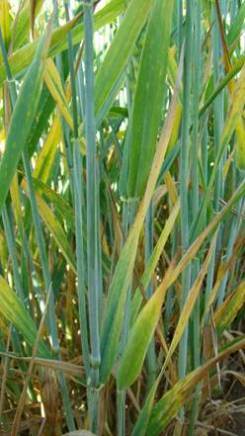