The U.S. government released international trade figures for July on September 6, the eleventh month of data for the 2016/2017 marketing year for corn and sorghum. With just one month of data still unpublished, U.S. exports of feed grain in all forms (GIAF) has set a new record high, the result of increased demand, competitive U.S. prices and extensive marketing efforts by the U.S. Grains Council (USGC).

Thus far this marketing year (September-July), U.S. GIAF exports increased 17 percent from the same time the year prior (Sept.-July) to 106.4 million metric tons, according to data from the U.S. Department of Agriculture (USDA) and USGC analysis. The 11-month total now exceeds to previous record set for the full 2015/2016 marketing year.

Impressive year-over-year gains for corn and the grain equivalent of ethanol bolstered the record for exports. Corn exports totaled 54.7 million tons (2.15 billion bushels) during the first 11 months of the marketing year, a 29 percent jump year-over-year and the best performance for U.S. corn exports since 2007/2008.

With one month of data still remaining, current ethanol exports of 1.3 billion gallons have already exceeded the all-time high of 1.1 billion gallons set in 2011/12, largely due to record-setting exports to Brazil and India.

Additionally, increases in the grain equivalent of beef, pork, and poultry meat exports realized an 11 percent gain in corn compared to the same time the year prior and account for more than 21 million tons (827 million bushels) of corn equivalent exported in the form of meat. 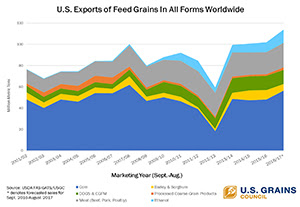 These large export increases offset declines in other coarse grains (sorghum and barley) of 30 percent for a year-to-date export total of 5.8 million tons. Of note, exports for U.S. distiller’s dried grains with solubles (DDGS) and corn gluten meal fell only slightly year-over-year, despite the absence of the top two traditional buyers – China and Vietnam – the latter of which announced a return to the market as of Sept. 1, 2017.

Other markets, including the Southeast Asian region and countries like Mexico, have diversed the marketplace this year by increasing purchases.

There is no doubt these export sales have helped support a difficult market for U.S. farmers, driven by prices, yields and market development work.