On Monday, February 13th, Patrick Gillespie reported at CNN Money Online that, “Mexico is one of the top buyers of American corn in the world today. And Mexican senator Armando Rios Piter, who leads a congressional committee on foreign relations, says he will introduce a bill this week where Mexico will buy corn from Brazil and Argentina instead of the United States.

“It’s one of the first signs of potential concrete action from Mexico in response to President Trump’s threats against the country.

“‘I’m going to send a bill for the corn that we are buying in the Midwest and…change to Brazil or Argentina,’ Rios Piter, 43, told told CNN’s Leyla Santiago on Sunday at an anti-Trump protest in Mexico City.”

On Wednesday, Jonathan Ellis reported at the Argus Leader Online (Sioux Falls, S.D.) that, “A Mexican lawmaker’s threat to ban the importation of U.S. corn would mean lower prices for South Dakota corn farmers at a time when prices are already low.

The article noted that, “Mexico can’t unilaterally block U.S. corn exports without running afoul of the North American Free Trade Agreement, Richardson said, but Trump has also indicated that he wants to renegotiate the treaty, which adds uncertainty to the market.”

Corn, Soybeans, and Dairy were the top three U.S. agricultural exports to Mexico in 2015 (Graph USDA-FAS). Click Image to Enlarge

Meanwhile, Reuters writers Mark Weinraub and Karl Plume reported on Thursday that, “Mexico’s attempts to diversify its supplies of corn could threaten a crucial market for U.S. farmers who are increasingly dependent on exports to unload record stockpiles that are depressing prices.

“Mexico buys nearly all its corn imports from the United States – shipments that totaled 13.603 million tonnes in the year ending Aug. 31, 2016. The sales account for about 28 percent of total U.S. corn exports, according to the U.S. Department of Agriculture.

But now Mexico wants to lessen that dependence as U.S. President Donald Trump threatens to upend trade between the countries. On Thursday, Mexico’s agriculture minister revealed plans to visit Argentina and Brazil to buy yellow corn.

However, the Reuters article noted that, “Mexico tends to import grain from South America or countries other than the United States only when it is cheaper or supplies are tight.

“U.S. corn prices of around $190 per tonne are about $10 to $15 lower than South American grain delivered to Mexico, trade sources said.

“‘The extent to which there is any switching that takes place (by Mexico) to South America frankly all depends on price. At the moment it doesn’t work so there would have to be something else that triggers it,’ Soren Schroder, chief executive of grain trader Bunge Ltd, said on a call with analysts on Wednesday.” 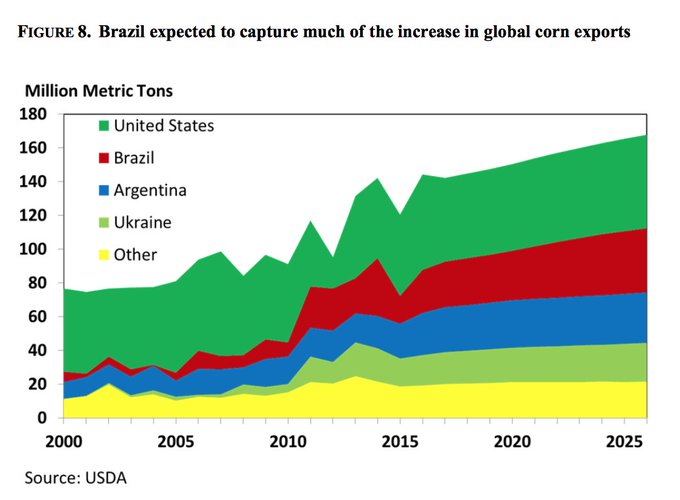 Beyond Mexico, and looking more broadly at Asian markets, Bloomberg writer Alan Bjerga reported on Wednesday that, “Now the Trump administration may slow the adoption of Asian trade pacts, giving Brazil an opening.

“The outcome could be a shift away from America, the world’s traditional breadbasket. Brazil, Australia, Russia, and Ukraine are well-positioned to profit from any American disruption.

‘You’re shooting yourself in the foot,’ says Joe Glauber, a former chief economist for the U.S. Department of Agriculture and chief U.S. negotiator on farm issues during the Doha Round of global trade talks. ‘If a supplier starts to be seen as unreliable, the global supply chain adjusts, and that player will lose market share going forward.’

Executive branch trade policies have garnered the attention of lawmakers and have generated concern.

“In a meeting between administration officials and members of the Senate Finance Committee, Grassley highlighted the risk of retaliation to farmers and ranchers who depend on overseas markets to sell their products.

‘If the president can negotiate better deals for the United States, I’m all for it, but I don’t want to see anything that hurts major sectors of the economy, like agriculture,’ Grassley said in a statement following the meeting.

And Wall Street Journal writer William Mauldin and Siobhan Hughes reported on Friday that, “Republicans, many of whom support free trade and are therefore skeptical of Mr. Trump’s approach, have mostly avoided direct criticism. The GOP lawmakers are giving him a chance to get his team in place and formulate more detailed policies on issues like the fate of existing U.S. trade agreements.”

Although President Trump has withdrawn the U.S. from the Trans-Pacific Partnership negotiations, and has indicated a desire to renegotiate the North American Free Trade Agreement, most of his statements on trade policy have yet to play out into real actions by the United States.

“Trump has offered few details of his trade plans, beyond pressuring U.S. companies to keep or create jobs in America, taking a tougher line in forging deals and slapping tariffs on nations that are deemed to exploit the United States,” the Associated Press recently noted.

Meanwhile, Wall Street Journal writer Jacob Bunge reported on Wednesday that, “The flow of basic foodstuffs from U.S. farms to overseas markets has yet to be disrupted by President Trump’s talk of trade overhauls, according to the chief executive of commodity trading giant Bunge Ltd.

“Price and supply remains the dominant factor for companies like Bunge and the governments and food companies purchasing U.S.-grown corn and other crops, he said. Grain traders are closely monitoring Washington for any signs of a shift arising from changes to U.S. trade policy.”

And David Bennett reported on Thursday at the Delta Farm Press Online that, “Lawmakers on the House Agriculture Committee spent the morning of Feb. 15 staking out priorities for the 2018 farm bill.

“It didn’t take long for Arkansas Rep. Rick Crawford to bring up Mexico’s potential reaction to the Trump administration’s continued flirtation with a Border Adjustment Tax.

“‘There’s some talk about retaliatory measures (by Mexico),’ said Crawford. ‘We’ve heard reports they no longer will buy U.S. corn but rely exclusively on Brazil and Argentina. That may just be talk in the heat of the moment, and I expect it is. But the reality is, it could happen, correct?'”

The article noted that, “‘Yes,’ said Pat Westhoff, director for the Food and Agricultural Policy Research Institute at the University of Missouri. ‘There have been discussions in Mexican circles on what they might do to try and get people’s attention.

“‘It’s also true that if you just rearrange trade patterns, the effect on the corn market may not be all that huge. … It’s very important to watch this discussion as it goes forward.'”