The Federal Reserve Bank of Kansas City published a brief report late last month (“Volume of New Ag Loans Drops,” by Nathan Kauffman and Matt Clark) which stated that, “The volume of new farm loans dropped sharply in the fourth quarter of 2016, according to respondents to the Survey of Terms of Bank Lending to Farmers.

“The survey, which asks bankers about new loans to farmers, indicated the volume of non-real estate loans in the farm sector dropped 40 percent from a year ago. The 40-percent drop was the largest year-over-year decline in nearly 20 years (Chart 1).”

The report explained that, “The sharp reduction in the volume of new farm loans at commercial banks occurred during a prolonged decline in farm revenue;” Kauffman and Clark added that, “A 30-percent year-over-year drop in the price of feeder cattle helped reduce the cost of purchasing the animals and likely contributed to the sharp reduction in loan volumes in the livestock sector.”

The Kansas City Fed report noted that, “More generally, lower prices appeared to temper demand for new agricultural financing as producers tried to curtail expenditures.  Some banks, recognizing greater risk in the farm sector, may have been more selective in financing new loan requests, and some financing decisions may have been delayed in the environment of heightened risk.”

Lower production expenses could also be a factor in the decreased agricultural loan demand.  “Because loans used for operating expenses comprise about 60 percent of non-real estate loan volume, the decline in input expenses likely curbed the volume of new farm loans originated in the fourth quarter as farmers prepared for the 2017 planting season,” the Fed report said.

“After reaching record highs exceeding $390 billion in 2014, farm production expenses are forecast to dip for the second consecutive year in 2016. The expected $9.2-billion (2.6 percent) decline is the second largest year-over-year reduction in expenditures since 2009, behind the $31.7-billion (8.1 percent) decline from 2014 to 2015. Reduced input costs are expected to ease, but not eliminate, some of the pressure from lower cash receipts.” (“2016 Farm Sector Income Forecast” (USDA-ERS)).

After additional analysis, Kauffman and Clark pointed out that, “Prolonged financial stress in the farm sector also has continued to curb farm real estate values.  In fact, farmland values in all states in the Chicago, Kansas City and Minneapolis districts have declined from their recent peaks [see table below].

Most notably, nonirrigated cropland values have dropped by 20 percent, on average, in Kansas and 19 percent in Iowa since 2013.

“Although, this represents an annualized rate of only 5-8 percent, persistent and gradual declines could lead to further financial stress in the farm sector in the coming years.”

Last month’s Fed report concluded by saying that, “Although declines in the cost of some key inputs have provided modest relief, profit margins have remained low and new farm loan originations dropped sharply in the fourth quarter. If profit margins remain low through 2017, the pace of new debt will be a key indicator to monitor in assessing the severity of financial stress through the year.”

Meanwhile, the Chicago Fed Letter (“The Downturn in Agriculture: Implications for the Midwest and the Future of Farming.” Federal Reserve Bank of Chicago, by David B. Oppedahl) stated this month that, “Prices for key agricultural products have fallen from their peaks in recent years, while input costs have not fallen as much.

“Consequently, many farm operations in the Midwest have had lower revenues and thinner profit margins–and some even losses. On November 29, 2016, the Federal Reserve Bank of Chicago held a conference to examine the agricultural downturn in the Midwest and discuss future directions for farming.”

The Fed Letter noted that, “Jonathan Coppess, clinical assistant professor, University of Illinois at Urbana-Champaign, expanded on the role of government, particularly the USDA, in addressing the current downturn.

Farm revenues were quite strong when lawmakers and other government officials were coming up with the current USDA support programs (formally implemented under the Agriculture Act of 2014).

“Coppess showed that over 90% of corn and soybean acres are now enrolled in ARC with payouts based on county-wide performance…[and]…[g]iven the five-year rolling nature of ARC’s payment trigger, the agricultural downturn did lead to valuable payments from the federal government for most midwestern counties, notably for 2014 and 2015. Yet, in future years, Coppess indicated, ARC revenue guarantees will adjust downward.”

The Fed Letter added that, “Today the focus of agricultural lenders is indeed on the adequacy of farm borrowers’ working capital, cash flows, and cost controls. According to [Paul N. Ellinger’s (vice provost for budget and resource planning and professor, University of Illinois at Urbana-Champaign)] own analysis, the agricultural sector (especially in the Midwest) has already entered cautionary territory; more and more farms have become riskier from an investment perspective.

“Ellinger explained that as the farm sector deals with its problems, community banks that serve the sector will face a number of issues in the years ahead. These include rising interest rates, greater regulatory uncertainty and compliance costs, farm operations that outgrow the lending limits of institutions, limited tools for stress testing loan portfolios, and expensive technology investments.” 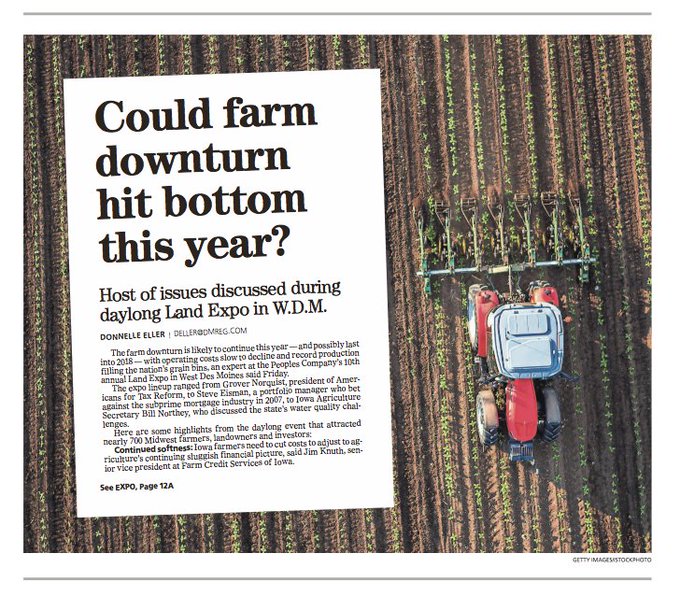 And on the front page of the business section in Saturday’s Des Moines Register, Donnelle Eller reported that, “The farm downturn is likely to continue this year — and possibly last into 2018 — with operating costs slow to decline and record production filling the nation’s grain bins, an expert at the Peoples Company’s 10th annual Land Expo in West Des Moines said Friday.”

In related developments regarding grain production and stocks, the Food and Agricultural Organization (FAO) of the United Nations indicated on Thursday that, “Confirming prospects of a record harvest, FAO’s estimate of world cereal production in 2016 has been lifted further to 2.592 million tonnes, up 15 million tonnes (0.6 percent) from December.” 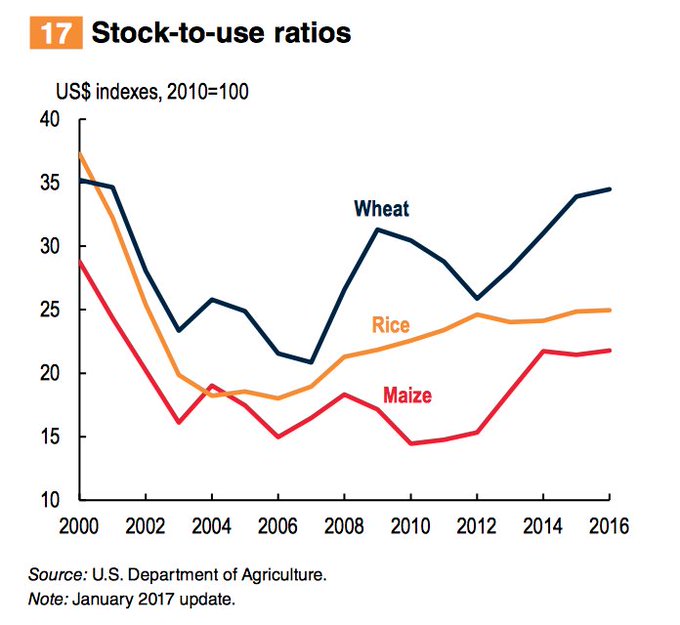 Lastly, on the issue of biofuels, after four years of positive ethanol production profits, Reuters writer Chris Prentice reported on Friday that, “During the past two weeks, ethanol production margins have turned negative, according to data from Iowa State University, after staying positive for a year. Ethanol and corn futures indicate weak margins ahead.”

Mr. Prentice explained that, “It is unclear what President Donald Trump’s team plans for biofuels. The acrimonious debate over the federal biofuel mandate pits two of his core support bases against each other – Big Oil and Big Corn. Oil firms complain the program drives up gasoline prices, while the corn industry has lobbied hard for a program that consumes millions of tonnes a year of the grain to produce ethanol.

‘It’s not like we’re getting ready to jump off the grain bin or anything, but is there a little bit of concern? Yeah,’ said Monte Shaw, executive director of the Iowa Renewable Fuels Association.

There will be many changing variables within the U.S. agricultural economy as policy makers begin to draft a new Farm Bill.  Farm lending, production costs, commodity output and prices, as well as renewable energy rules, could all factor into the policy needs of farm households in the coming months.