Reuters writers Tom Polansek and Mark Weinraub reported on Tuesday that, “U.S. food producers and shippers are trying to speed up exports to Mexico and line up alternative markets as concerns rise that this lucrative business could be at risk if clashes over trade and immigration between the Trump administration and Mexico City escalate.

“Diplomatic relations have soured fast this month, as the new U.S. administration floated a 20 percent tax on Mexican imports and a meeting between the presidents of the two countries was canceled. U.S. President Donald Trump has also pledged to renegotiate the North American Free Trade Agreement (NAFTA) trade deal with Mexico and Canada.

“Mexico is one of the top three markets for U.S. farm production.”

Polansek and Weinraub explained that, “Some U.S. producers of corn, soybean meal and distillers dried grains (DDGs), an ethanol byproduct, are trying to accelerate sales to Mexico because they are uncertain about the risk for new tariffs to disrupt trade, said Rafe Garcia, general manager for U.S. operations at shipper Primos & Cousins USA.” 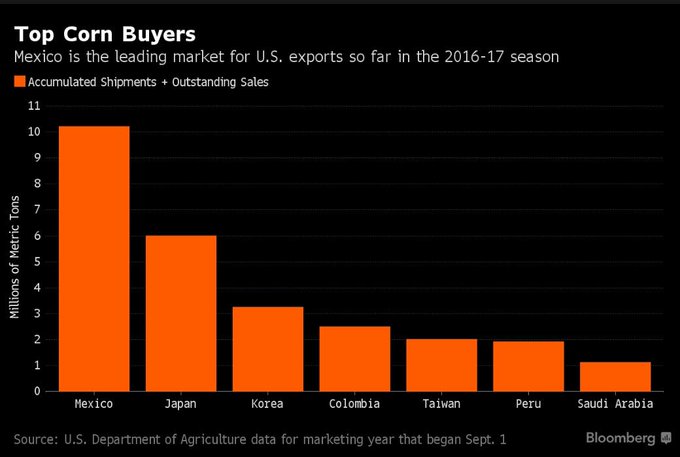 The article added that, “Mexico is expected to import about 4 percent of the U.S. corn crop in 2016/17, according to the U.S. Department of Agriculture (USDA). It buys 7.8 percent of U.S. pork production, the U.S. Meat Export Federation said.”

Tuesday’s article noted that, “Mexico could target sanctions on farm products, in particular, in an attempt to punish rural communities that supported Trump in the presidential election, said Katherine Baylis, associate professor of agricultural and consumer economics at the University of Illinois.

‘Look at where past trade retaliations have happened: It is amazingly pointed and usually pointed at crucial products from swing states which quite often turn out to be agricultural,’ Baylis said.

Also on Tuesday, Jerry Hagstrom reported at DTN that, “Former U.S. Agriculture Secretary Tom Vilsack, who this week became president and CEO of the U.S. Dairy Export Council, told dairy industry leaders [in Orlando] Tuesday that they should call their Mexican customers and reassure them that they still want to do business with them.”

The DTN article indicated that, “IDFA is concerned about the relationship with Mexico because 39% of U.S. dairy exports go to Mexico, or roughly $1.3 billion in products.”

Ranchers are also hopeful that beef exports to Mexico are not interupted, the United State’s exported $1.1 billion of beef to Mexico in 2015.

Barbara Soderlin reported in yesterday’s Omaha World-Herald that, “The number of U.S. cattle grew for the third straight year in 2016, as ranchers continued to rebuild their herds thanks to good hay and pasture conditions.” 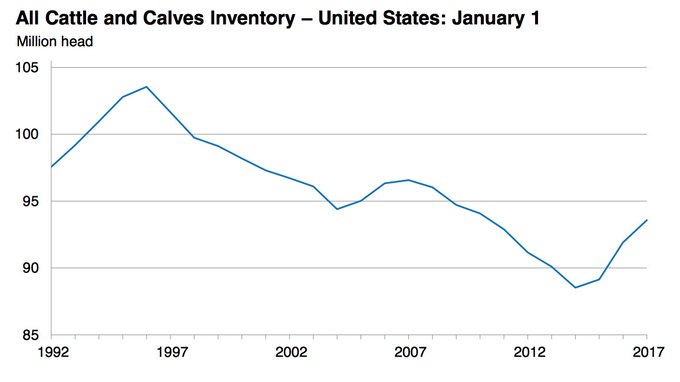 January 1 cattle inventory up 2% from Jan ’16. Click Image to Enlarge

“[Cattle feeder Bill Rhea of Arlington] hopes exports will continue to grow, consumers will eat more beef and this year will be the crest of the current herd expansion,” the article said.

Russell Hubbard and Steve Jordon reported on Monday at the Omaha World-Herald Online that, “Midlands ag folks were crystal clear Friday when they said they do not favor any U.S. trade policy that will lead Mexico to retaliate with punitive border levies of its own that might cut deeply into the ability of Nebraska and Iowa farmers to sell their grain profitably south of the border.

Meanwhile, the editorial board at the Minneapolis Star-Tribune indicated recently that, “If confirmed, Sonny Perdue, the last nominee to President Trump’s cabinet, will take on a task that just got monumentally more difficult.

Corn, soybeans, and dairy were the top three U.S. agricultural exports to Mexico in 2015 (Graph USDA-FAS). Click Image to Enlarge

“As secretary of agriculture, Perdue will be among those dealing directly with the fallout if Trump follows through on a threat to slap a 20 percent import tax on goods from Mexico, a top trading partner for the U.S. and, not incidentally, Minnesota. Trump floated the proposal — which a spokesman later said was being weighed against other options — just days after he pulled the U.S. out of the Trans-Pacific Partnership, which this page and many Republicans long favored as a way of lowering trade barriers.

Perdue will face a host of challenges, although the increasingly fragile relationship with a key trading partner for the U.S. and, not incidentally, Minnesota, undoubtedly has just risen to the top.

And late last month the American Soybean Association, along with 130 other agricultural organizations, sent a letter to President Trump which stated that, “With the productivity of U.S. agriculture growing faster than domestic demand, the U.S. food and agriculture industry–and the rural communities that depend on it–relies heavily on export markets to sustain prices and revenues.

Therefore, the U.S. food and agriculture industry looks forward to working with the new Administration in preserving and expanding upon the gains our sector has achieved within the North American market and strengthening our competitiveness around the globe.”

Although there is concern from many in the agricultural sector about the potential adverse implications of Trump administration trade policies, rural America was key to Mr. Trump’s election.

Despite the fact that Mr. Trump did not win Illinois, he did carry four of the five top counties in agricultural sales (2012 Census)- (See tweet below).

In Illinois, top 5 counties in Ag Sales (’12), McLean, Iroquois, DeKalb, LaSalle, Whiteside -All but DeKalb went for Trump in ’16. Click Image to Enlarge