A rekindled interest in the use of prescribed fire as a tool for rangeland management has led a range expert to bring her agency’s personnel up to speed on the ancient practice. 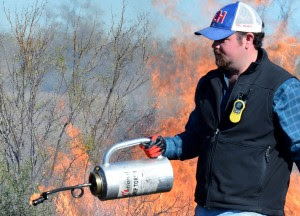 Lisa Brown, AgriLife Extension agent in Menard County, was one of the participants.  She said she is looking forward to having more prescribed-fire activity in her county.

“Prescribed burning may be scary to some folks, but done correctly and on a regular basis, it helps the rangelands become better as far as native grasses go,” she said. “Done regularly as well, it keeps the grass under control so that a wildfire won’t be quite as devastating  should it go through your property.”

Russell said the increasing interest in prescribed fire is growing rapidly on all levels due to the exponential growth of cedar, mesquite and prickly pear across large swaths of West Texas.

“Prescribed burning is one of the most cost-effective tools we have as range managers to effectively manage our pastures and ensure the overall productivity and sustainability of our native perennial grasses,” Russell said.

“We spent the last two days in a prescribed-burn training learning how the fire ecology works,” he said. “Prescribed fire is a management tool that should be used to bring our rangelands back to what they used to be. It offers a cost-effective way to rid our pastures of negative brush.”

Russell noted that fire culture has decreased or disappeared in West Texas over the past few years, so she hopes her efforts and the interest shown by landowners, coupled with that of AgriLife personnel, will help revitalize and grow the practice.

“So equipping AgriLife Extension agents with a sense of prescribed burning, increasing their knowledge and also just building an overall fire culture is very important for the management of our rangeland,” she said.