As the snow melts away from Winter Storm Goliath and cattle are gathered back into pens and pastures, cow-calf producers should continue to watch their animals for lingering after-effects, according to a Texas A&M AgriLife Extension Service specialist. 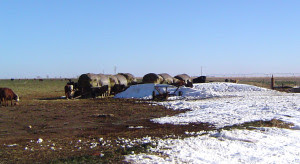 “There is some potential for latent effects of the sustained low windchill temperatures during the recent blizzard conditions,” said Dr. Ted McCollum, AgriLife Extension beef cattle specialist in Amarillo.

McCollum said the bitter cold may have frozen the ears and tails of cattle and other animals, so partial loss may occur over the next few weeks.

“This may present some concern to the owners, but it is not a threat to the long-term well being of the cattle,” he said.

Another area of concern is the wind and low temperatures could have resulted in frozen teats and sensitive udders, McCollum said. The udders of cows nursing calves may be sensitive,  which could affect milk consumption by the calf for a few days.

If the teats were impaired by frostbite, then there may be some mastitis and/or partial loss of udder function, he said, advising those tending to the cattle to watch the calves and check the udders.

“Also, cows that will be calving later this year could have been affected, but the effects may not be apparent until calving time and lactation,” McCollum said. “Again, observe the calves and the udders after calving.”

He said the extreme temperatures and frozen surfaces also could have impaired the prepuce and penis of the bulls as well as the scrotum and testicular function. It is recommended that bulls undergo a full breeding-soundness examination well in advance of the time they are expected to service cows.

Bulls that are with fall-calving cows now should be checked immediately, McCollum said. The breeding soundness exam will not only check for damage to the organs but also evaluate semen production and quality.

Fall-calving cows that are currently with bulls may have delayed pregnancy, he said. The extreme cold may have caused the cows to go into anestrus. Estrus activity will return to normal in a week to two weeks, barring any other insults.

“It is the producer’s decision, but extending the breeding season a couple of weeks might be a consideration,” McCollum said.

He advised that cow body condition continually be monitored.

“The extreme cold during the blizzard and the lack of significant warm-up since was a tax on body energy reserves,” McCollum said. “It may be necessary to increase supplemental feed for the remainder of the pregnancy period to offset the loss in body condition. And, winter is not over yet.”