Cotton production in the Texas High Plains can survive expected climate changes, especially if water is available to compensate for higher temperatures, and increased atmospheric carbon dioxide concentrations can mitigate yield loss in the dry years.

“We believe cotton production in the Texas High Plains can withstand the effects of future climate variability under moderate increases in carbon dioxide levels,” said Dr. Srinivasulu Ale, AgriLife Research geospatial hydrologist in Vernon. “But our study shows that maintaining high yield levels will still require greater than 80 percent of current irrigation levels, even when increased carbon dioxide levels are accounted for.”

The overall study was funded by Cotton Incorporated with model calibration partially supported by a Texas A&M Water Seed Grant. 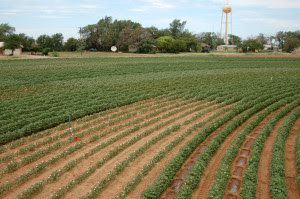 He said it is known that climate change can affect agriculture both positively and negatively. Increases in carbon dioxide concentration due to climate change are positive for plant growth. Previous research reported elevated carbon dioxide levels could enhance crop growth and yield by increasing photosynthesis and decreasing stomatal conductance. As a result,  transpiration per unit leaf area is reduced and overall water-use efficiency is improved.

“We know this region is predicted to have warmer summers and reductions in annual precipitation in the future,” Ale said. “Such trends would necessitate larger groundwater withdrawals to meet the higher evapotranspiration needs of cotton and prevent yield loss.”

That is why it is important to begin assessing the impacts of climate change on cotton production now to enable the development and evaluation of irrigation strategies for efficient utilization of groundwater resources in this region in the future, he said.

“Our study showed it may still be possible to produce cotton yields of 1,000 pounds of fiber per acre even under high deficit – 60 percent – irrigation,” Ale said.

In this study, the CROPGRO-Cotton model was evaluated for the Texas High Plains region using 27 treatments of measured data from cotton water-use efficiency experiments conducted from 2010-2013. 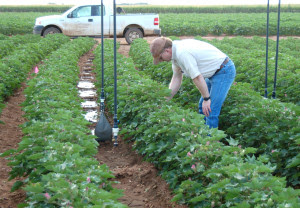 The measured data came from Bordovsky’s work at the Texas A&M AgriLife Research Center at Halfway and the impacts of future climate variability and change on irrigated cotton yield were assessed at Halfway and four other locations: Bushland, Lockney, Lubbock and Lamesa.

The future climate data used in this study was taken from research conducted by Dr. Naga Modala, also a co-author on the paper, while he was a graduate student in Ale’s program.

Also modeled in this study were the effects of reducing irrigation due to declining water levels, Ale said.

On an average, when compared to historic yields, simulated future yields across the Texas High Plains decreased within a range of 4-17 percent due to the combined effect of the increase in temperature and decrease in rainfall when carbon dioxide concentration was assumed to remain at the current level of 380 parts per million under three climatic model scenarios.

At the same time, when irrigation was reduced by 40 percent, the average 2041-2070 yields under the constant carbon dioxide concentration and the increasing concentration scenario decreased by 37 percent and 39 percent, respectively.