A product that helped stop a 100-year-old battle with a cotton disease in Texas has been proven effective in stopping the same fungus from devastating vineyards, according to a Texas A&M AgriLife Research plant pathologist.

“There are a lot of vineyards in Texas, both established vineyards and new ones, that are losing vines to cotton root rot,” said Dr. David Appel, who led the research with graduate student Sheila McBride.

“So essentially we took a compound that was approved for use on cotton in 2012 and put it into the vineyards. And after about four years of research, we are absolutely confident of the results we are getting in suppressing the disease on grapevines.” 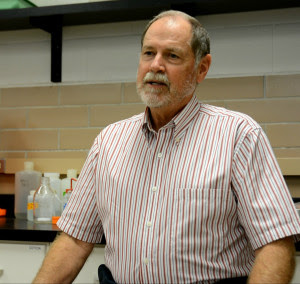 Their work has resulted in a 24C local needs registration from the Texas Department of Agriculture for use on grapes. Appel said not only is the approval a boon for vintners in the state, but it will be “a gateway to apples, peaches, olives, pecans and other horticultural crops” for possible use to control root rot disease.

“I imagine that with our testing and the results we’ve gotten, it is going to make it that much easier to get relief for these other crops in Texas as well,” he said.

The notorious fungus, Phymatotrichopsis omnivora, is the bane for growers of a multitude of fruit and vegetable crops, McBride said. Found in the soil, it can linger for decades waiting for its crop of choice to be planted, then attack with vengeance. 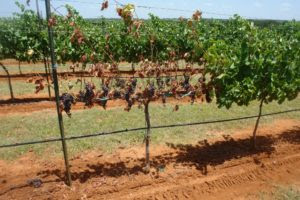 For grape growers, the effect of the fungus shows up late in the season, she said. Within two weeks, a healthy looking vine will wilt and the leaves turn brown but stay attached to the vine. Very quickly, the vine dies.

In her job as diagnostician for Texas A&M AgriLife Extension Service’s Plant Disease Diagnostic Laboratory, McBride not only disliked giving vintners the verdict for their sick vines, she also regretted not being able to provide a treatment plan. 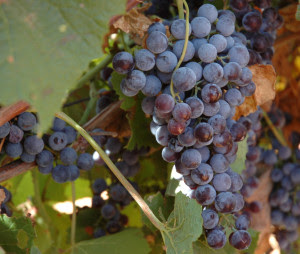 “I would hear the exasperation in their voices from their vines dying, and they would ask me what could be done,” she said. “With cotton root rot, there wasn’t anything I could tell them as a management strategy to do.”

But Appel and McBride knew of breakthrough research by AgriLife Extension plant pathologist Dr. Tom Isakeit in College Station and AgriLife Extension integrated pest management specialist Rick Minzenmayer of Ballinger. Though no advances had been made on the disease in decades – and the issue had all but dropped due to decades of losing the battle – Isakeit and Minzenmayer decided in 2008 to examine all fungicides that had come on the market for other crop diseases since the 1990s.

They hit the jackpot in controlling cotton root rot on cotton with a little known chemical called flutriafol, also known as TopGuard Terra, which had been developed for an anticipated outbreak of soybean rust that never materialized. Because of their work, the chemical was granted a 24C registration for local needs use for cotton in 2012. 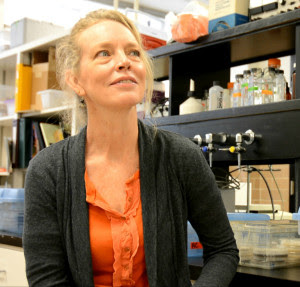 Armed with that information and a grant from the Texas Department of Agriculture, McBride and Appel worked with several grape growers and FMC, the company that manufactures TopGuard Terra, to study its impact on vineyards.

McBride established a field trial in vineyards in Travis, Real and Burnet counties. Two of the vineyards were known to have the cotton root rot fungus. The third was a newly established vineyard that had begun to show symptoms of the disease.

Initially, the team set up drench application which consisted of a bucket with tiny holes in the bottom that allowed the chemical to drip along the trellis onto the soil to soak the root system. By 2014, the chemical company allowed the researchers to applyflutriafol by chemigation through the existing irrigation drip lines, McBride said.

“In order for this to really work for the vineyards, it has to be feasible for them to use it,” she noted.

After repeated trials over several years, the team proved that flutriafol was effective in controlling cotton root rot disease on grapevines.

Appel said with the 24C label approved by the Texas Department of Agriculture, growers are permitted to begin using the chemical according to instructions on the label, which can be printed from the Internet. Typically it is applied in the spring, and can be applied up to twice a year to control the disease, he said.

Jim Kamas, AgriLife Extension pomology and viticulture specialist at Fredericksburg, said the study and subsequent labeling of the product “represents the culmination of over a century of research dedicated to mitigating losses on grapevine to this serious disease.

“A number of people have worked diligently on this project, with no motivation other than the betterment of the Texas grape industry,” he said. “We are thankful that our experimental vineyard was part of the work that has validated the efficacy of this product and are looking forward to working with growers to make sure Topguard Terra is used precisely and effectively to mitigate the threat this disease poses to commercial grape production across Texas.”

“This is suppressing the pathogen. I don’t think we’re ever actually going to kill it, but we can control it,” McBride said. “It’s a rewarding ending for this study. There are always  questions that need to be answered with science, but I’m really excited that there is a 24C label and we are able to actually help the grape growers.”