More rainstorms swept over much of the state, leaving fields too soggy to work in many areas, but generally benefiting wheat, pastures and rangeland, according to Texas A&M AgriLife Extension Service personnel.

Thunderstorms and high winds and/or hail in parts of the Panhandle and South Texas knocked down some wheat. In other areas, dryland wheat didn’t receive moisture at the right time and was stressed. But generally, winter wheat was doing well, thanks to plentiful moisture, according to the AgriLife Extension agent reports.

According to the National Weather Service, most of the Coastal Bend and Southeast regions, and parts of South and East Texas received 10 inches or more of rain in the last two weeks. More than 15 inches was received in isolated areas.

Parts of the Panhandle remained the exception. Producers in Deaf Smith and Randall counties still needed rain for newly planted corn and dryland wheat. Rolling Plains producers were still welcoming any rain received as it helped rangeland recover from the drought and will give spring plantings a good chance this year. 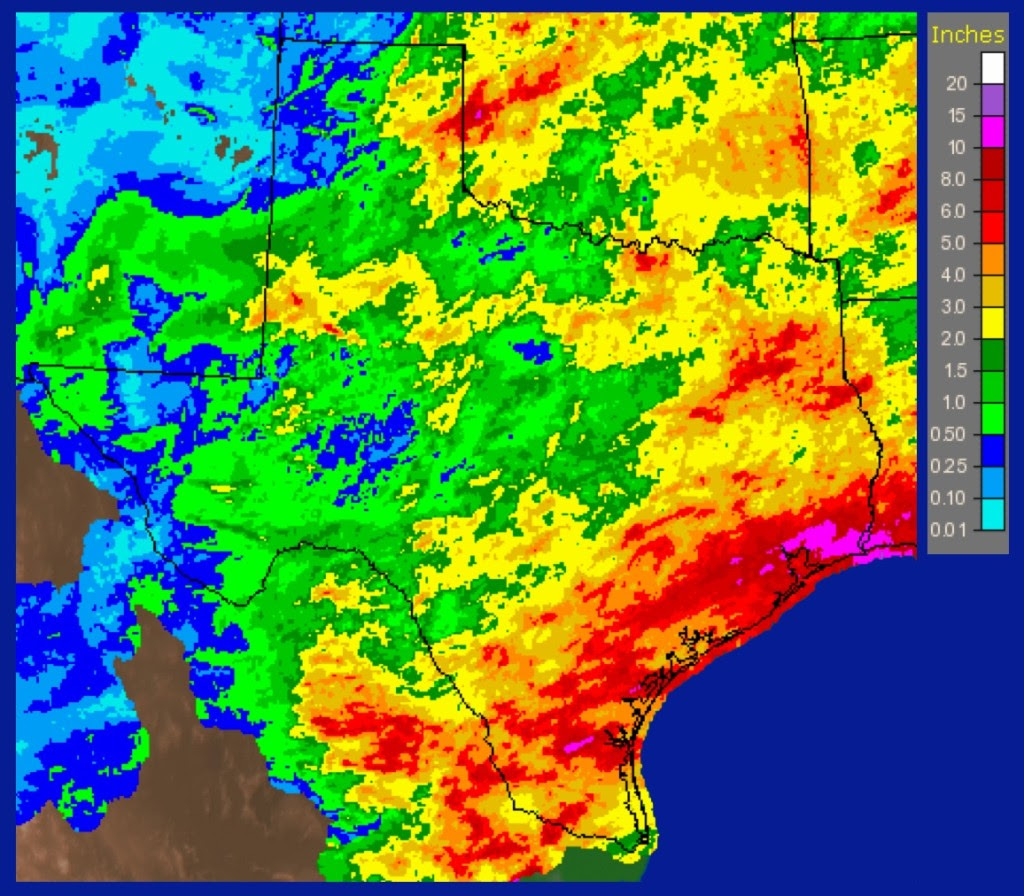 Nearly all of Texas continued to receive rain, with accumulations of 10 to 15 inches in some areas. (Graphic courtesy of the National Weather Service)

In many parts of the state to the east of U.S. Interstate 35, the continued rain was too much of a good thing. However, comments from AgriLife Extension county agents indicated producers weren’t complaining that much, despite soggy, muddy fields and delayed plantings.

In North Texas, continued rain caused flooding and delayed corn planting past the crop insurance deadline and made it too wet to fertilize wheat. In Van Zandt County, the Tawakoni and Fork lakes were nearly full for the first time in more than five years, said Tommy Phillips, AgriLife Extension agent there.

Lakes and streams were also full to overflowing in East Texas, according to reports from AgriLife Extension agents there. Winter pastures were doing well – perhaps too well – as ryegrass could not be removed from pastures because of wet conditions, and was over-shading warm-season grasses and hindering their growth.

Central: Parts of the region received scattered showers, with 0.5 to 1 inch accumulations. Livestock remained in good condition as spring grasses came on strong. Corn and cotton emerged. Wheat and oats were maturing. Wheat growers seemed to have avoided a major rust outbreak. Stock-water tanks and rivers were full. With enough sunny days, hay harvesting was expected to begin within a week or so. Because of delays from wet weather, many producers switched from planting corn to planting grain sorghum or soybeans. Soil moisture, crops overall, and rangeland, pastures and livestock were all in good condition.

Coastal Bend: The region had another week of heavy rains, with most areas receiving 3 to 6 inches. Strong winds associated with the rains may have damaged some wheat and cornfields, reducing yields. Hail was also reported in isolated areas. Rice planting was also behind. Most growers needed just two to three more good days to finish planting sorghum. Rangeland and pastures were in very good condition due to consistent rains. Pecan producers were scouting for pecan nut casebearer moths. Livestock were also in good condition as they had plenty of grass to eat.

East: Fields throughout the area remained extremely wet. Continued rainfall was making it difficult to get into pastures and fields. Producers were waiting on drier conditions to move equipment stuck in muddy fields. Lakes, ponds, streams and creeks were full. Subsoil and topsoil moisture was adequate or surplus. Some trees were uprooted and toppled because of saturated soils and heavy leaf canopies. Winds from a recent storm system also damaged trees. Newly planted trees were not doing well in the wet soils. Herbicide and fertilizer applications were being applied where equipment could go and not get stuck. Livestock were doing well with very little supplemental feeding taking place. Spring calving continued. Cows were gaining weight on the new grass. Bulls were turned out for the breeding season.

Far West: Most counties received from 0.5 to 1 inch of rain. Some counties received strong to severe thunderstorms with the rain. Pastures and rangeland were in fair to good condition, and many ranchers were able to stop supplemental feeding of livestock early. Subsoil and topsoil moisture was adequate to short. Wheat was headed out in many areas and in fair to good condition. Producers were either planting upland cotton and grain sorghum or preparing fields to do so. Most counties had average temperatures for mid-April, but parts of Presidio County had a high of 105. Most producers were finishing working goats, lambs and spring calves.

North: Topsoil moisture was adequate to surplus. With the corn-planting deadline passed, it was estimated that only about 15 to 20 percent of designated corn acreage had been planted. The moisture received from late February through mid-April prevented most farmers in the county from planting their corn crop. Most will turn to an alternate crop of either grain sorghum or soybeans. Wheat was continuing to do well with the recent moisture, and producers were beginning to topdress with fertilizer. Winter annual pastures were also doing very well, and Bermuda grass pastures were starting to come out of dormancy. The weed population was on the rise. Drier conditions were needed for other crops to be planted. Livestock were doing well, and spring-born calves looked good. Fly and bug populations were increasing. Feral hog activity was on the rise.

Panhandle: The region had near to slightly above average temperatures with some rain received. Amounts mostly ranged from a trace to 1 inch, with a few areas getting 3 to 6 inches. Soil moisture continued to be rated mostly adequate to short. In Carson County, hail accompanied the rain and damaged wheat. Deaf Smith County producers only received 0.10 to 0.30 inch, and winds as high as 50 mph quickly dried out that small amount of moisture. In Hansford County, areas east and south of the city of Spearman received 5 inches of hail, which damaged wheat. Producers were busy trying to finish up fertilizer and herbicide applications in anticipation of planting corn. Once they’ve planted corn, producers will likely move to planting cotton and/or sunflowers. Grain sorghum planting dates were still two weeks away. In some areas, dryland winter wheat was suffering from lack of moisture. Dryland wheat that received rain may make a gr ain crop, depending upon how much rain it received. Some wheat under center pivots was already being watered or being grazed out, while some dryland wheat was being grazed out because of lack of rain. Wheat streak was starting to show up in some fields. Ochiltree County received some much-needed moisture, but it was a little late for most of the dryland wheat. Cattle on wheat were performing well. Rangeland and pastures continued to vary from poor to fair condition, with most counties reporting good to fair.

Rolling Plains: Parts of the region received as much as 2 inches of rain. Dryland wheat was already headed out, and it was expected that if more rain is received, it could do better than early planted wheat. Producers continued to scout fields for stripe rust. Though rust was found in most wheat, it currently was not at severe enough levels to warrant treatment. In some instances, the decision to treat was dependent upon whether the wheat will make a grain crop. The recent rains benefited pastures, rangeland and filled stock tanks. Grasses continued to flourish. Farmers continued to prepare fields for cotton planting. Livestock were in good condition with plenty of grazing. Cow/calf producers were busy working spring calves. Winter-annual grasses headed out and warm-season grasses were greening up. The peach crop showed promise with minimal damage from earlier storms.

South: The region’s weather continued to be cloudy with scattered showers. Rangeland and pastures were in good condition, and supplemental feeding of livestock was unnecessary throughout the region. In the northern part of the region, most areas received rains of 1.5 inches or more. Live Oak County received 4 to 9 inches of rain throughout the week. In the northern part of the region, producers were spraying wheat and oats for rust. Potatoes were flowering. Corn was doing well, and sorghum planting was completed, with most of the crop emerged. Soil moisture ranged from adequate to surplus. In the eastern part of the region, some wheat was knocked down by high winds, and producers were uncertain if it would stand back up for harvesting. Early planted grain sorghum fields were beginning to emerge. Kleberg and Kenedy counties received about 4 inches of rain, which stopped grain sorghum and cotton planting until the saturate d fields dried out. Soil moisture was adequate throughout the area. In the western part of the region, thunderstorms brought strong winds and large hailstones that knocked down or damaged trees. Zapata County received from 5 to 10 inches of rain. The heavy rainfall halted all spinach, cabbage and carrot harvesting. However, cool temperatures favored spinach growth. The spinach season should be extended by an additional two to three weeks as a result. Also in Zavala County, corn and sorghum crops were already emerged, onions progressed well, and watermelon planting was planned as soon as fields dried out. Soil moisture was adequate throughout the western counties. In the southern part of the region, more rain fell and fields remained saturated, further delaying planting and other activities. The rains hampered the harvesting of vegetables, citrus and sugarcane. Soil moisture was adequate to surplus.

South Plains: The region received good rains, with totals from 0.5 to 1 inch over much of the region. Garza County received from 1.5 to more than 4 inches. Scurry County got from 0.75 to 11 inches in a few locations, but the average was 1.5 inches. Wheat looked great, with some fields starting to head out. More corn was being planted; no cotton was planted yet. Lubbock County reported good moisture received across the county with producers continuing to prepare for planting season. Wet conditions in some areas halted field preparations and stopped prewatering. Moisture conditions in rangeland and pastures continued to improve, and warm-season grasses continued to grow. Cattle continued to improve as well.

Southeast: Soil moisture throughout the region varied widely, but was mostly adequate to surplus. Brazos, Galveston and San Jacinto counties reported 100 percent surplus. Rangeland and pasture ratings varied widely too, with fair ratings being the most common. San Jacinto County reported pastures to be 100 percent excellent. The scattered showers continued to keep already wet fields soggy. Winter annuals were still producing grazing thanks to adequate moisture and mild temperatures. Warm-season perennial grasses were beginning to grow. Fields were too wet to allow for fertility and herbicide applications until recently. In Fort Bend County, rain continued to delay planting. Some producers were able to plant a little this week, but for the most part, everything was on hold. Livestock were in good condition.

Southwest: Recent rains were good, though some counties remained dry, and winter grasses were starting to show signs of water stress. Bluebonnets and other wildflowers were in bloom. The peach crop remained on track, with a lot of thinning expected to be needed. Temperatures were normal for mid-April. Rangeland was much improved. Livestock were in good condition. Wild turkeys were nesting.

West Central: Days were warm and nights mild, with isolated and scattered thunderstorms in most areas. Hail accompanied some of the thunderstorms. Soil moisture remained very good. All areas needed more rain to fill stock tanks, ponds and lakes. Cotton producers were applying herbicides. Rust continued to infest wheat, but producers were waiting to determine if treatment was economically justified. Winter wheat continued to improve, with most fields in good to excellent condition. Some producers were harvesting wheat for hay. Grain sorghum planting was underway. Some forage sorghum was being planted as well. The potential yields for oats looked good. Rangeland and pastures were in good condition as warm-season grasses and forbs continued rapid growth with recent rains and warm temperatures. Livestock were in fair to good condition. Spring cattle working was underway. Wildlife, including wild turkeys, seemed to be doing well .