Depending upon the weather and consumer tolerance for high prices, 2015 could be a make-it or break-it year for beef producers, according to a Texas A&M AgriLife Extension Service expert.

Of course, it’s all about supply and demand, said Stan Bevers, AgriLife Extension economist, Vernon. In Texas and the rest of the U.S., cow inventory numbers are down, largely due to recent droughts. This means calf supplies are down as well.

And as many parts of Texas have come or seem to have begun to come out of the drought, livestock producers are avid about rebuilding herds or at least having stocker calves to take advantage of available winter wheat grazing, Bevers said. All in all, this means producers are seeing some extraordinary prices at the sale barn.

“Calf prices have been pretty much record prices throughout the year,” he said. “Every time we think we’ve reached a new plateau, we just wait a week or two weeks and they go higher. It’s not uncommon right now to see 450-pound calves bringing around $3.60 a pound, which puts them somewhere in the neighborhood of $1,600 a calf, which is extraordinary and more than we thought we’d ever see.”

In the Rolling Plains area, where Bevers is stationed, as well as many other parts of Texas, the rains came at just the right time to really stimulate the planting and growth of winter wheat pastures. The good forage availability is likely to contribute to driving calf prices even higher throughout much of 2015, Bevers said.

“Here in North Texas, we have probably had as near as good of wheat pasture as we have in the last four years,” he said. “That’s putting pressure on producers to put stocker calves on wheat pasture in order to glean a few more dollars from them.”

Longer term, there is some evidence total U.S. herd numbers are being rebuilt, Bevers said.

There’s a lot of evidence, at least in Texas, that producers are already starting to rebuild herds as large parts of the state move out of the drought, Bevers said. But rebuilding continues to be an expensive proposition.

“We’re seeing producers retaining their heifers or buying females of various sorts and ages,” he said. “It is not uncommon for young cow/calf pairs to currently bring well over $3,000,” he said. “Five to six or seven years ago, $1,200 to $1,500 was unheard of.”

Bevers said he expects the high replacement prices to continue to be stable as colder weather sets in. Producers may hold back during the winter as they do not want to bring more females in until they see what the weather and forage supplies are going to be.

“But come spring, March and April, when things start to green up again, chances are we’ll see another run up on these females,” he said. “At some point, we’ll get stocked up again and prices will go down, but I don’t see that happening at least until the fall of next year.”

What will ultimately govern calf and replacement prices will be the prices consumers are willing to pay, Bevers said.

“That’s the black swan, the unpredictable event: How high can the prices consumers pay at the supermarket go before they start cutting back,” he said. “Lately, demand has actually gone up, despite high prices. But consumers are buying more hamburger and less steaks and roasts.”

One factor that makes it unpredictable is that it takes as long as a year and a half for calf and replacement females that are bought today to affect consumer prices, Bevers said. Consequently, consumers won’t be affected by current calf or cow/calf prices until well into 2016.

There will be no regional reports for this issue of Texas crop, weather.

By agreement with the U.S. Department of Agriculture, AgriLife Extension county agent reports are collected by the agency’s National Agriculture Statistical Service in Austin and then routed to the appropriate regional offices. This year, as it did last year, the statistical service suspended collecting the county reports for December. The district reports will resume when the service begins collecting them again, usually the first or second week of 2015. 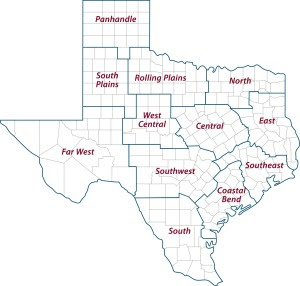 Prices are lower for a number of reasons, according to Russell. One, calves have to be shipped considerably farther north to the feedlot areas. And because of the warmer climate, there’s more Brahman influence, which also means they don’t grade as well and tolerate the winter cold up north as well as the crosses used in Central and North Texas.

“If the calves are worth less, then the breeding stock is worth less, because any capital asset is based on the cash flow you get from it,” Russell said.

Another reason south Texas calves are cheaper is that stocker cattle are not common in the area because there is not much winter wheat grown for grazing and pastures aren’t suitable, he said.

Still, the prices are historically high for the area. But many producers are resisting the temptation to take replacement heifers and cows to the sale barn for quick money.

“There’s some skepticism, but at the same time, price projections for the next few years are high,” he said. “And this will still induce people to hold back some females as there’s an opportunity to rebuild with the rangeland and pastures that we have. With calf prices as high as they are and likely to stay high for at least the next few years, you could easily pay off the investment in a young pair in two or three years.”

And the fact that the region was hit hard by the drought, as hard as parts of West Texas and the Panhandle, doesn’t seem to be discouraging producers from taking a long-term view, Russell said.

“Could the rains tail off again?” he said. “Well sure, but I think there are a number of people holding back heifers and taking advantage of the favorable price projections and improving rangeland and pastures.”

Out here, people are taking advantage of what we had, which was some decent rain in the summer, especially August and September” said Dr. Ted McCollum, AgriLife Extension beef cattle specialist, Amarillo.

And though the Texas High Plains has had some relief from the drought, it hasn’t had the turnaround that many other parts of the state have, McCollum said.

“There are some areas in the Panhandle that are still wanting for rain,” he said. “We had moisture and grew some grass, but you don’t have to dig very deep to find dry ground.”

Wheat was planted late because the preceding crop was late being harvested or the late summer rains prevented growers from getting into fields to plant, he said.

“So we’ve kind of had two ends of the spectrum when it comes to wheat,” McCollum said.

But even with calf prices so high, any Panhandle wheat that’s grazable will likely have stocker cattle on it, he said.

“If you look at what the prices for light calves were back earlier in the fall, stocker cattle producers can project a pretty good net margin in the spring,” McCollum said.

As for restocking cow/calf herds, that’s a different matter, he said. True, the improved range conditions are prompting some livestock producers to bring their cowherd numbers up, but there’s some holding back.

Most cow/calf operations will be on rangeland or perhaps on retired U.S. Department of Agriculture conservation reserve program acres, and a return to full-fledged drought conditions could change everything, according to McCollum.

The prices of cows alone are holding some people back, he said.

“The first of December, young to middle age cows that are three to eight months bred — meaning they will be ready to calve sometime after Christmas — were bringing $1,700 to $2,700 in Amarillo,” McCollum said.

“I’d say the restocking of those areas is fairly tentative right now. There are folks waiting to see if the summer of 2014 was a good year in the middle of a drought or if the drought is actually broken. Some of these guys are little bit leery of paying high dollar for a cow and finding we are still in a drought.”