“Little showers aren’t going to do it. We need a flood,” said a Texas A&M AgriLife Extension Service horticulturist who works closely with vegetable, fruit and nut growers in the Winter Garden region.


The Texas Winter Garden region is one of the major U.S. production areas of irrigated vegetables such as cabbage, spinach, onions, cucumbers and melons, along with pecans. The region lies southwest of San Antonio and is comprised mainly of six counties, Medina, Uvalde, Dimmit, Frio, La Salle and Zavala, but also includes parts of Atascosa, Maverick and McMullen counties.

The area has been particularly hard hit by drought over the last seven years, he said. Like much of the state, the region has seen the drought rolled back somewhat by substantial rains of 3 inches, 5 inches or greater. While this has helped dryland crops such as wheat and cotton, the rains haven’t been enough to recharge groundwater sources such as the Edwards or the Carrizo-Wilcox aquifers or the rivers.

All the vegetable crops require a lot of irrigation water, but the Edwards Aquifer has had to cut its allotments to growers by 44 percent in some areas this year, Stein said.

“The Carrizo-Wilcox is not in too bad of shape, but the Edwards is being taxed heavily by urban sprawl as well as agriculture.”

To recharge the aquifers and rivers at this time would “require a flood,” Stein said, by which he means a hurricane, a tropical storm or stalled out low-pressure area that would dump several feet of water on the region.

“They always say be careful what you wish for, but that’s what’s needed to recharge these aquifers and refill the rivers,” he said.

What growers may opt to do this year is to greatly limit planting August crops like cabbage and save their limited irrigation water for crops in the late fall or winter, such as spinach.

More information on the current Texas drought and wildfire alerts can be found on the AgriLife Extension Agricultural Drought Task Force website at http://agrilife.tamu.edu/drought/ . 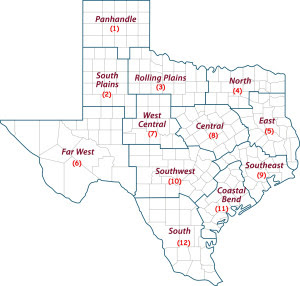 Central: Most counties reported good soil moisture, rangeland, pasture and crop conditions. All counties rated overall livestock conditions as good. The region saw a return to normal Texas weather for early August, with triple digit temperatures. Grain sorghum yields were well above average, with many farmers taking more than 7,000 pounds per acre. The corn harvest began and looked promising with yields exp ected to be above average. Grain elevators were filling up as more storage was being built. The sunflower harvest was wrapping up. The hot and dry conditions, though good for grain harvest, stressed pastures. Grass was starting to dry out. Stock-water tanks remained full, and livestock conditions were holding steady. Watermelon production slowed. Grasshopper pressure increased.

East: Normal dry and hot weather returned to the region. A few counties reported scattered showers. Stock ponds and creek levels remained good. Growing conditions were excellent. Topsoil and subsoil moisture continued to be adequate. Many hay producers were making more hay than they had in years. The quality of hay continued to be high. Armyworm and grasshopper infestations continued to plague crops, and producers were spraying pastures for control. Peas, watermelons, tomatoes and peppers were still producing record yields. The pecan crop was moderate to heavy. There was no aphid activity but there were reports of pecan scab. Corn looked good, with extremely good yields expected in about two weeks. The grain sorghum crop was in good condition, and harvesting was expected to begin next week. Early planted cotton looked good, with lower bolls opening. Later-planted cotton was a little behind in maturity, with insect pre ssure ra ted as moderate. Livestock were in good to excellent condition. Some producers were beginning to wean calves. Local auction barns reported prices remained high for all classes of cattle. Feral hog damage was reported in Wood County.

North: Hot weather arrived with high temperatures in the upper 90s to 100s. Topsoil moisture varied throughout the region. About half the counties reported adequate topsoil moisture. The rest had mixes of short to adequate moisture. Fannin had some surplus soil moisture. Scattered rains were reported throughout the region. Crops were maturing, and corn and grain sorghum continued to look good. Summer pastures were doing well for the most part. Hay harvesting was ongoing. Livestock were in good condition. Horn fly and grasshopper populations continued to expand. Armyworms were reported across the region. Hunt County reported sugarcane aphid infestations in grain sorghum.

Panhandle: Temperatures were near normal for the region for this time of year, which is to say hot. Some isolated areas in the region received rain, from a trace to 2 inches. Cotton was progressing well, but was still behind in maturity in most areas. Corn was rated mostly good. Hutchinson County corn producers were facing battles with diseases such as green snap, Goss’ wilt and Alternaria leaf blight, which were beginning to show up in numerous areas. Hemphill County reported having a lot of pasture grass and fat cows. Rangeland and pastures continued to improve after earlier rains, but more moisture was needed. Cattle were in good condition. Weeds remained a problem throughout the region, as did horn flies on cattle. In Collingsworth County, insect and disease pressure remained high on cotton and peanuts due to the moisture and high humidity. Gray County reported an increase in fall armyworms and corn earworms, a nd farme rs were spraying to control the pests.

Rolling Plains: Temperatures reached into the triple digits. Pastures and rangeland, while in good condition for August, were beginning to show stress from the hot weather and no rain. Cotton was in the blooming stage. Dryland and irrigated cotton were both on track for an average to maybe a little above-average yields. Pastures remained green, with plenty of grazing for cattle. But more moisture will be needed for grazing to continue in some parts of the district. Livestock were in good condition, and producers continued to be pleased with prices they received from sales. Some producers began purchasing cattle for restocking. Producers were able to put up decent amounts of hay this summer. Wheat farmers were preparing for fall planting.

South: The region’s highs were in the 90s and 100s. Several counties received isolated showers, but the rains were not enough to significantly improve soil moisture, range and pasture conditions. In the northern part of the region, the corn and other grain harvests were completed in some counties, but were continuing in others. Hay was being harvested with a small amount marketed. The harvesting of early planted grain sorghum began, cotton was in the boll stage and peanuts were in the pegging stage. In Frio County, all crops were under irrigation. In McMullen County, supplemental feeding continued at a steady pace. Soil moisture conditions throughout northern parts of the region were short to very short. Rangeland and pastures continued to decline. In the eastern part of the district, some counties received as much as 2 inches of rain; other’s only got about 0.1 inch. The harvesting of cotton and sorghum conti nued. Co tton yields in Jim Wells County were good; grain sorghum yields there averaged about 3,500 pounds per acre. Beef cattle prices in that county continued to soar, as replacement-type cows continued to command top prices. A few select No. 1 type 600-pound crossbred heifers brought $1,500. Five-hundred pound steers averaged $205 per hundredweight. Cull cows and bulls were bringing $125 to $130 per hundredweight. In the western part of the region, temperatures above 100 degrees benefitted crops but took their toll on rangeland and pastures. Corn and grain sorghum harvesting was very active as the hot weather provided optimum drying conditions. The dry conditions also prompted producers to irrigate cotton and pecans. In the southern part of the region, farmers were preparing to harvest dryland cotton. Sesame harvesting was active in Hidalgo County. In Starr County, preparations for fall planting continued. Soil moisture was short to very short. Rangeland and pastures remained in fair to poor condition.

South Plains: Parts of the region had light, scattered showers over the weekend. Despite the showers, Lubbock County dryland cotton continued to show signs of stress, while many fields reached early cutout. Irrigated cotton varied in condition, depending on irrigation capability. Sorghum ranged from the whorl to seed head development stage. Fall armyworms continued to be a concern for producers. Some cornfields were showing signs of heat and drought stress, with many fields reaching early full dent stage. Cotton development ranged from just beginning to bloom with as many as nine nodes above white flower, to just past physiological cutout with three nodes above white flower. More heat units were needed. Insect activity was extremely light this season. However, grain sorghum continued to be hit hard by whorl worms. Peanuts had only light worm activity and grasshoppers were feeding on foliage. With the current temperatu res, dis ease pressure was suppressed. Some weed problems with herbicide resistance continued on a limited basis. Escaped weeds were being mechanically managed.

Southwest: Hot and dry weather continued to decrease topsoil and subsoil moisture. The grain sorghum harvest was wrapping up with average yields reported. The corn harvest began but no yield data was available yet. Most irrigated cotton was in bloom and squaring was beginning. Pasture and forage grasses were suffering from moisture stress. Hay fields were no longer growing, and after the first cutting, haygrazer fields needed a rain to make a second cutting. Livestock remained in fair condition. Where grazing pressure was moderate, livestock should be alright without supplemental feeding for a while.

West Central: Hot, dry, windy conditions continued, with triple-digit temperatures late in the week. Soil moisture was declining. Preparations for fall crop planting were underway. Early planted grain sorghum looked good. Some late sorghum was beginning to show some drought stress, as well as some forage crops. Cotton was maturing. Irrigated cotton was in good to fair condition, but all dryland fields needed moisture.. Native and improved grass pastures were holding up fairly well despite not receiving rain for three weeks, but were showing signs of decline. Producers continued cutting and baling hay. Grasshoppers appeared in large numbers in all areas. Livestock remained in very good condition.